Preparing for a 5K, 10K, half marathon, triathlon? 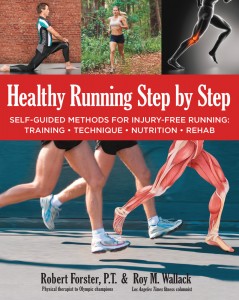 New Book by Robert Forster developer of the 24Fit DVDs:

Its execllent, informative, easy to read and a great guide to peak performance and how to avoid injury.  Do read the browse sample pages function on Amazon and read introduction and see table of contents.

Drawing from Forster’s three decades of training and treating Olympic athletes and more than 10,000 runners at his award-winning Santa Monica, California, physical therapy and high-performance centers, this book emphasizes that better performance is inextricably bound to injury reduction and that a comprehensive, science-based training plan with built-in anti-injury “insurance” must include these crucial elements:

He talks about the Four Pillars in the House of Health and Performance.

1. Structural Integrity (strength and flexibility) – Structural intergrity refers to how well the muscular and skeletal systems function to propel you forward and protect against injury. Many injuries are caused by the body being imbalanced, some muscle groups too strong too weak. The book illustrates exercises that improve posture,  strength and flexibility, such as pretzel, hip flexor, standing abductor, which are also demonstrated in Phase 1 “Stability” of the 24 Fit Workout DVDs.  He explains that strength training is a magic bullet for injury prevention, robust bones and muscles and time saving short cut to speed and endurance.

2. Metabolic efficency – The importance of burning fat as a fuel supply not carbs.

3. Nutritional Opimisation. – Food should be looked as fuel, needed to run the body. Lots of tips and advice.

4. Running technique – For every sport or fitness activity , proper technique ensures optimum performance and decreasd injury e.g. how you swing your arms, your stride length..

And the foundation for house is recovery. Without it, all work is futile because it is during periods of rest that your fitness actaully evolves.

Comparing modern man to forebears: “They didnt go 22-23 hours without moving, then bolt off on heat throbbing run for 45 minutes”. Their bodies were strong and tendons and ligaments hardended by constant movement from a range of activities. Today modern man is subjected to daily bouts of intense, repetitive motion, leading to stress and injury.  And  a work ethic typically without proper rest and recovery.

Some studies show 50% of runners get injured every year, many due to the wrong running technique.

This book also includes detailed, step-by-step rehabilitation matrixes for the five most common running injuries: IT band syndrome, Achilles tendonitis, shin splints, plantar fasciitis, and hamstring injuries. Using these unique matrixes as your guide, you’ll recover from injuries more quickly and understand what you need to do to prevent their reoccurrence.

Review –  Bob Forster is our secret weapon and a big part of our success. This book reveals all of the techniques and lessons learned over our eight Olympic games together and is useful for athletes of all ages and abilities.

– Bob Kersee, the most successful Olympic track and field coach of all time , with 44 medals

ROBERT FORSTER, PT, has practiced Sports Physical Therapy in Santa Monica, CA, for 31 years. Robert has lectured throughout the US and Europe on Sports Rehabilitation and safety in exercise. Robert served as a private physical therapist at four Olympic Games for Olympians Jackie Joyner-Kersee, Florence “Flo-Jo” Joyner, Alyson Felix and their teammates who have won a combined 32 Olympic Medals under his direct care. He also worked pro athletes Pete Sampras, Kobe Bryant, Elton Brand, Maria Sharapova, as well as M.M.A. champions including B.J. Penn. Robert has published several articles in the scientific press and co-authored The Complete Water Power Workout Book published in 1993 by Random House. He has also written a regular column in Triathlete magazine, appeared in several episodes of the popular Fit to Hit series on the Tennis Channel and recently created the Herbalife 24Fit Workout DVDs. based on the science of periodisation training.

ROY M. WALLACK is a Los Angeles Times health and fitness columnist and former editor of Triathlete and Bicycle Guide magazines. A participant some of the world’s toughest running, cycling, and multisport events, including the Boston Marathon, Badwater UltraMarathon, Eco-Challenge, La Ruta de los Conquistadores, and TransRockies Run, he finished second in the World Fitness Championship in 2004. Wallack has written for Outside, Men’s Journal, Runner’s World, Competitor, Bicycling, Mountain Bike, and authored The Traveling Cyclist: 20 Worldwide Tours of Discovery (1991) and Bike for Life: How to Ride to 100 (2005), an athletic longevity plan for cyclists.

Also contact us for our free 5k to 5weeks training plan which covers a running schedule and nutrition.